Optimized for the iPhone 5!

Welcome to Blood & Glory Legend – the highly anticipated sequel to the AAA blockbuster smash-hit Blood & Glory! Return to the arena and bask in the blood-hungry cheers of the crowd as you fight to become a LEGEND!

“Blood & Glory: Legend still manages to be one of the premier fighting games on smartphones and tablets, with a plot thrown in for good measure.” – Game Trailers

“Fans of the first game should not be surprised to learn that this one looks amazing.” – Gamezeebo

“Visually, Blood & Glory: Legend offers distinct improvements over its forerunner, with detailed environments, impressive combatants, and neat effects such as the blood patches that appear on the fighters as they receive damage.” – PocketGamer

The top-rated gladiator combat game continues with Blood and Glory: Legend! Equip lethal weapons and epic armor in your quest to achieve blood-soaked victory over the Emperor himself!

MOTION COMIC STORYLINE
Journey through the Empire, leaving blood-thirsty bosses in your wake as the all new animated comic story unfolds!

STUNNING & AWARD-WINNING AAA GRAPHICS
The bleeding-edge graphics are optimized for the Retina Display of the iPhone 4, 4S, iPod (4th gen), iPad 2, New iPad and the iPhone 5. Note that the iPhone 3GS, 3rd generation iPod and lower devices are not supported.

DAILY BONUS!
Come back every day to earn free money and equipment! Complete battles ever day to earn even larger Bonus rewards!

Blood & Glory: Legend is free to play, but you can choose to pay real money for some extra items, which will charge your iTunes account. You can disable in-app purchasing by adjusting your device settings.

Bug fixes and other improvements to game performance 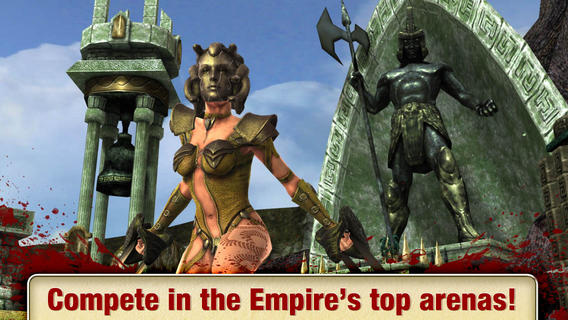